Karen Kelly is a journalist from East Kilbride. She recently volunteered with Pravah ICS in India, and worked on projects that focused on improving the lives of women and young people in the rural village of Sadri in Rajasthan.

The first thing that struck me about the village in which I was living was the veil that all of the women wore over their faces. They wore beautifully bright and embroidered saris that flowed from their waist to the ground. Accompanied with a bodice like crop top, the sari was twisted, looped over the head and fashioned into a veil, which was then pulled down over their face in the presence of men or elder women. Seeing the act of a woman having to stop mid sentence as she realised a man had entered the room and that she should now cover her face was really difficult to swallow. The veil was a physical barrier that prevented her from speaking and from being listened to. 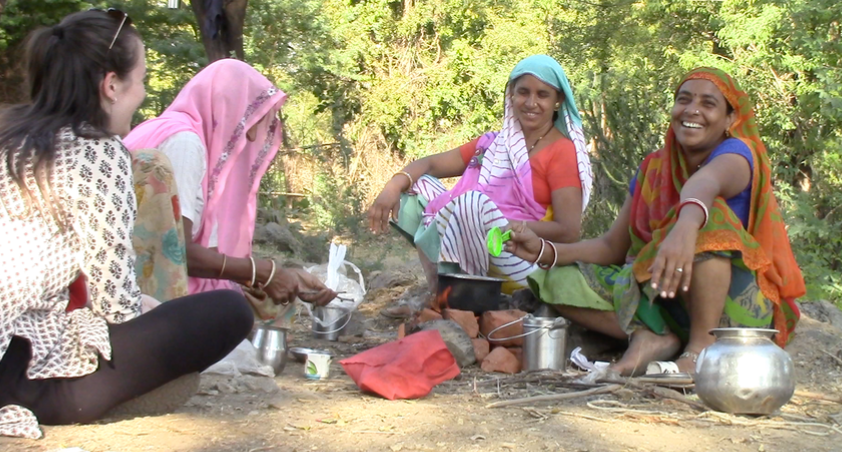 A week or so into the project my team approached the Sarpanch to ask for advice on how to move forward with the project. I learned that the position of Sarpanch in Sadri was reserved specifically for a woman and my first thought was how reservation could be linked to the campaign for equal representation in Scotland. I smiled at how progressive the idea of reservation was in India. Admittedly I had no prior knowledge of the scheme and was completely naïve to the corruption that went hand in hand with reservation.

As the conversation with Sarpanch continued, the more she gave half answers and avoided answering us completely. As she stumbled over her answers, her husband who was previously perched on the outside of the circle began to speak up.  The more he moved spoke and closed into our circle I realised that the Sarpanch was not as empowered as I first believed.

It turned out that ambitious husbands often exploit positions in Government reserved only for women. They grab the opportunity to enter into politics using their wives’ name and face to campaign. When we spoke about the Sarpanch in the village, people referred to the husband alone.

And so working closely with a Charity called Jatan Sansthan, we tried to empower the Sarpanch to take more ownership of her role. In order to do this we set up a women’s caucus and named it ‘Behenchara’, which translates as Sisterhood. However the term sisterhood is not a commonly used term in the Hindi language and even the concept of this word merited a few giggles in the village.

I chose Pravah to volunteer with as they focus on women’s rights and as a feminist I wanted to improve the lives of women in less fortunate circumstances than myself. However I was not prepared to face the daily inequalities that are a reality for so many Indian women- of which wearing a veil over your face is arguably the easiest to deal with.

For more information on the charity work that Jatan Sansthan carry out visit their website www.jatansansthan.org.