Chair and Co-Founder of Women 5050, Talat Yaqoob, tells us about how media and cultural stereotyping contributes to a landscape with fewer women leaders:

Sexism in the media is apparent day in, day out. Whether it is the pages of The Daily Star who seem to thing a naked woman is needed sprawled across a page to enable us to understand the news or advertising selling apples but of course needs a woman seductively biting into one for us to purchase it. Sexism in media is not new, but it is an on-going, and what feels like an increasing, problem.

When I talk about this I often get told to “brush it off”, “That’s just how it is” or the rarer but more painful “at least women are in the media, it’s only a problem if you make it one.”

The reality of course is – I am not making it a problem, it is a problem. A big one. Let me show you just a few examples of how much of a problem this is:

Here’s how Nicola Sturgeon was depicted during the General Election (The Sun 2015): 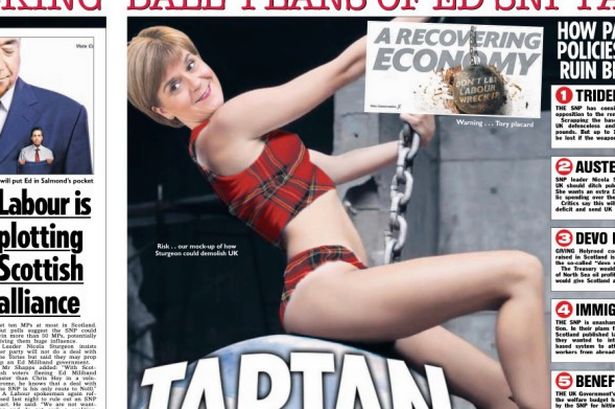 Nicola Sturgeon again, during the independence referendum (The Daily Mail 2014): 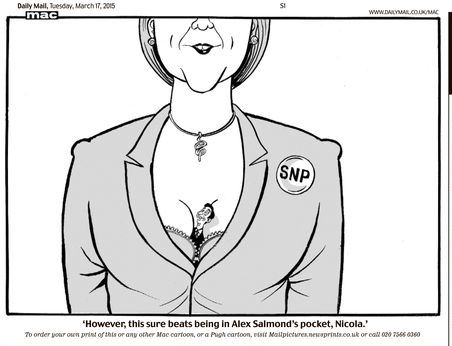 This is how Kezia Dugdale MSP was described (Edinburgh Evening News 2015):

When was the last time a male leader was described as this? (Daily Mail, 2016)

Who cares what you think Ruth, why are you wearing that colour? (Daily Mail, 2016)

The headline of the above article (Daily Mail, 2016)

And  most recently, how the media is illustrating Theresa May – evidence A (Daily Mail, 2016)

Evidence B (Mirror, 2016) – ask yourself; when was the last time we asked a male MSP to justify why he doesn’t have children:

And finally, there was that time where women (Sorry, girls) were not members of the cabinet, but on a modelling contract: 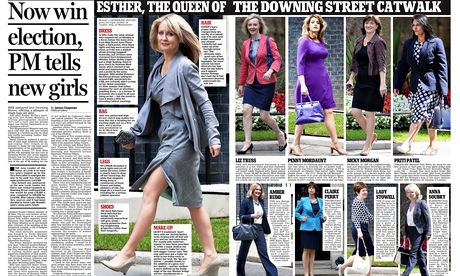 The Women 5o50 campaign is fighting for more women to be leaders in councils, parliament and on public boards, but when you have media critiquing women leaders or potential leaders not for their policy stances, but what they wear, their haircuts, their personal lives and the pitch of their voices, it is not surprising that fewer women than men come forward to take on these roles. Who would put themselves under that level of cruel scrutiny? It is old, it is tired, it is time for it to stop. There is potential that main parties both north and south of the border will be lead by women – whilst this is certainly not a sign in of itself that we have reached a “post-feminist” society (trust, me) it does bring to the fore just how ridiculous this commentary is and highlights how much of a novelty our media seems to think women in positions of power are -still. Get over being surprised at their existence, get over thinking they are there to look good. Ask them the questions that matter – how will they make our country fairer? What is their view on austerity? What will they do for the 1 in 4 women who experience gender based violence?

Media and women’s representation – it’s a chicken or egg situation:

Do we need to have more women in parliament first, their leadership becoming normalised and therefore media taking their existence more seriously will follow. Or do we need media to become more mature and respectful in its depiction of women first and then more women leaders will follow? The reality is, we need both to be happening at the same time for there to be any advancement in women’s representation and for us to change the culture of sexism around us.

In the meantime, I will prepare myself for my regular dose of eyerolls and tweeting disdain at papers/journalists. Feel free to join me.

2 thoughts on “The Tiresome Sexism in our Media”