Monica Lennon, Councillor for South Lanarkshire, tell us about why equal representation 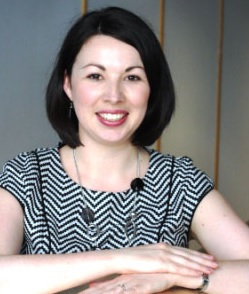 matters to her and the very real sexism that women candidates and elected representatives face even today.

When I stood in the 2012 council elections I hadn’t fully appreciated how rare women are in local politics. It was little things at first. “You’re not like most councillors”, one officer remarked as I settled into my new role. “Well done you – a lady councillor,” was one verbal pat on the back from a well-meaning constituent.

Slightly more awkward moments followed – that time when a local clergyman only acknowledged me at an event when a male colleague signaled I was a councillor too. He’d ignored me when he thought I was the bag-carrier.

The brutal fact is that over three-quarters of council seats are occupied by men.  I am one of the 24 per cent. The gender imbalance in local politics is staggering.

During the referendum it bothered me a great deal. The persistent gender gap in voting intentions kept ‘women’ in the spotlight.  And thanks to the impressive grassroots campaigning by women on both sides of the referendum divide, the under-representation of women in Scottish politics has climbed its way up the political agenda.

Placing an even number of men and women around her Cabinet table, Nicola Sturgeon is earning a reputation as a First Minister committed to gender equality.  Jim Murphy and Kezia Dugdale are leading a gender-balanced Scottish Labour top team. Both the SNP and Scottish Labour are committed to quotas for public boards.

But we continue to hear very little about the exclusion of women from town halls and city chambers across Scotland. It wasn’t hugely difficult for Nicola Sturgeon and Jim Murphy to ensure the top jobs in their teams were shared evenly between men and women. In contrast, smashing down the barriers that keep women out of the corridors of power in their own communities requires serious intervention.

Gender equality is a cornerstone of our democracy at every tier. Politics is too important to be left in the homogenous hands of a few. That’s why I support Women 5050, quotas and all.

In the aftermath of the referendum, Women 5050 was born and warring politicos were reminded there are many issues on which we agree.  As general election swords prepare to clash, Women 5050 is the perfect place to take refuge and acknowledge that your opponents are mere mortals too.  If a fairer Scotland is your goal, where women and men in a community near you have the same opportunities to contribute to public life, sign up and get involved.

Monica Lennon is a Councillor in South Lanarkshire and is Vice Chair of Hamilton, Larkhall and Stonehouse Constituency Labour Party

1 thought on “Why I’m a Supporter”